Before You Punish a Child December 3, 20183 Comments 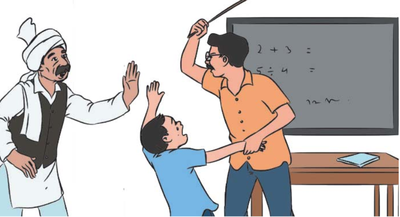 Most parents will agree that we cannot rule out punishment in the process of raising morally healthy and responsible children. However, there are certain questions we need to find answers to before giving a punishment for a perceived misbehaviour. Some of such questions are:
1. what is the child’s reason for acting this way? Children act the ways they do for different reasons. If the primary objective for giving punishment, which is to correct the child or instill discipline must be achieved, the first task should be to ascertain the reason for the behaviour.
Sometimes, children like to test the waters- they may sometimes act contrary to rules or instructions just to see how parents will react or if threatened consequences or punishment will actually be applied by parents. Some other times, they may indulge in prohibited behaviours simply because they think their parents will not find out.

In some cases, they may be trying to stamp their own right to choice or decision making- they are simply trying to get their parents to realise that they have grown up and can make their own choices in certain situations. An example of this, is when your teenage son continues to hang out with a particular friend in spite of your warning.

Sometimes, children’s actions may be genuine mistakes and not deliberate disobedience. For instance, you instructed your 13year old daughter to watch over what you had on the gas cooker while you attended to a guest. After watching for a while, she felt pressed and quickly rushed into the convenience to urinate, thinking she would quickly return to the kitchen but while at it, she realised that she also needed to deficate and decided to do that also. After all, she could not hold it back at that point, the feaces was already dropping. By the time she was done and returned to the kitchen, the food was already burnt.

While the first two instances represent deliberate disobedience and warrant punishment, the last two cases only require further guidance. In the case of the boy who could not detach from his friend, you need to uncover why it is difficult for him to detach from the friend. Remember that attachments are not easily broken. This young man also has the right to know why you consider his friend as a bad person. You need to explain. He needs to be assured that you have his best interest at heart. Punishment may not change his mind. He may become more discreet about the relationship. The only thing that will change his mind is personal conviction, and that should be the goal of your intervention.

In the last instance, the little girl only needs to be guided on how to handle such a situation in the future. She could either inform any other grown up to hold brief for her in the kitchen or simply turn off the gas while she uses the convenience.

2.Does the child have the capacity to act in the expected way? This is another crucial question that needs to be answered before punishment. In our efforts towards training our children, we sometimes place unrealistic demands on them. We seem to forget that child development occurs in stages. A child would find it difficult to perform any task for which he or she has not acquired the relevant mental and physical competences, irrespective of parental expectations. An example is instructing a 5year old girl to look after a 6month old baby and by the time you returned, many things had gone wrong. A 5year old is still a child and too young to look after herself, let alone look after a baby. Giving punishment in this instance would amount to mere cruelty.

3. Have I provided the right information? Children are new to the world and basically ignorant and inexperienced about how things operate around here. No matter how intelligent you are, when you get to a new city, you will need to learn about that place. So it is with children. One of the ways children get acquainted with the world is through education or information.
Sometimes, we get upset and punish children for expressing their ignorance even when we have not equipped them with adequate information. For instance, after your guest had left, your 3year old grabbed the glass and drank the drink that your guest left behind. You got really upset and spanked the child, even though that was happening for the first time, and you have also not educated the child about such a behaviour. We sometimes do not realise the need to teach our children about certain things until they get those things wrong, and instead of us to use that as an opportunity to educate them, we punish them.

Providing the right information also requires that you explain to children, the reasons behind instructions. It is not enough to tell children not to do certain things. It is important to explain to them, how the prohibited behaviour can negatively affect them or others. For example, don’t just tell your child not to take what belongs to another without permission, including things that belong to the parents or siblings. Tell him that the behaviour is called ‘stealing’ and stealing can lead someone to jail. Tell him that stealing deprives others of their rights and it is morally wrong. We have a duty to teach our children the real consequences of bad behaviour. Let them know that these consequences are far more devastating than any punishment we may give. Tell them the short and long term effects of bad behaviour as well as the benefits of good behaviour.

4. Have I provided an environment that is conducive for good behaviour? One of the ways we can influence our children to live up to expectation is to provide an environment that supports the behaviours we expect. This also involves eliminating elements that could inhibit good behaviour or encourage maladaptive behaviour. For instance, you walked into the living room and found your 7year old boy watching a pornographic DVD which you carefully hid in your wardrobe. You were so embarrassed, and you gave him a severe punishment. This is also like expecting a child whose parents fight regularly in his presence not to be violent. It is meaningless to expect good behaviour from children, if we create for them, an environment that can only breed bad behaviour.

Rapha Counselling Concepts was established in 2003 as a mentoring and counselling outfit for young people.  The initiative emanated from the founder’s passion to assist young people to resolve the challenges that impinge on their well- being and development with a view to helping them to achieve smooth transition to responsible adulthood and ultimately attain self-actualisation.

How to Make Good Leaders for Society – Rosemary Oshiomah...

Domestic Violence: How Families and Friends Can Help

Let others know about this page

Looking for an Outstanding Child Therapist?